In this section we will briefly go through the essential knowledge about Scala. You will first learn how to work with Scala shell, then learn how to use variables, functions with examples. Finally, we give instructions about how to compile and run a standalone program using sbt.

You can open a Scala shell by typing scala. Or, you can use sbt by typing sbt console. The second approach will help you add your project source code and dependencies into class path, so that your functions or library functions will be available for you to try to in the interactive shell. But in this training, we will stick to Scala shell for simplicity.

Once starting the Scala shell you will see

You can type :quit to stop and quit the shell, but don't do that now :-) Next you will learn some Scala operations in the shell with the following materials.

where val is a keyword in scala that makes the variables immutable. If you reassign a value to myInt, error will be reported.

In interactive shell, it's possible to redefine variable with same name. In Scala source code file, it's not allowed.

Instead, variables declared with var are mutable. Ideally, we try to use val instead of var if possible as a good practice of functional programming.

You may have concern that maybe too many immutable variables will be declared. Actually, with chained function calls, that situation is not the case for well organized code.

An example of mutable variable is

Scala may seem like a script language like JavaScript or Python, as variable type is not specified explicitly. In fact, Scala is a static type language and the compiler can implicitly infer the type in most cases. However, you can always specify a type as

It is always encouraged to specify the type so unless the type is too obvious.

Besides simple built-in variable types like Int, Double and String, you will also learn about List and Tuple in the training:

Here the List[String] is syntax of generics in Scala, which is same as C#. In the above example, List[String] means a List of String. Similarly, (Double, Double) means a two-field tuple type and both the 1st element and the 2nd element should be of type Double.

You can define a function and invoke the function like

Where x: Int is parameter and its type, and the second Int is function return type. There's not explicit return statement, but the result of last expresssion x*3 will be returned (similar to some other programming languages like Ruby). In this example, as there is only one expression and return type can be infered by the compiler, you may define the function as

Scala is object-oriented (OO), function calls on a class method are straightforward like most OO languages (e.g. Java, C#)

If the function does not have parameters, you can even call it without parenthesis

You can also define an anonymous function and pass it to variable like a lambda expression in some other languages such as Python:

where item: String => println(item) is an anonymous function. This function call can be further simplified to

where _ represents first parameter of the anonymous function with body println(_). Additional _ can be specified to represent more than one parameter. For example, we can calculate the total payment that a patient made by

In above example, reduce will aggregate List[V] into V and we defined the aggregator as _ + _ to sum them up. Of course, you can write that more explicitly like

Here reduce is a construct from functional programming. It can be illustrated with the figure below where a function f is applied to one element at a time and the result together with next element will be parameters of the next function call until the end of the list. 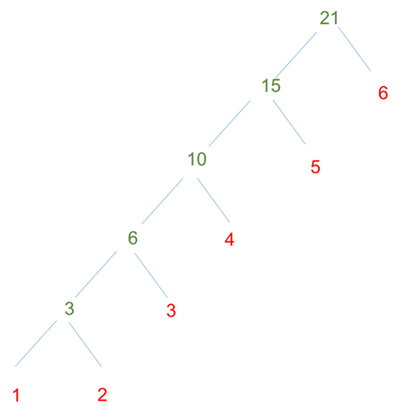 It's important to remember that for reduce operation, the input is List[V] and the output is V. Interested reader can learn more from wiki. In contrast to reduce, you can of course write code using for loop, which is verbose and very rare in Scala,

Declaration of a class in Scala is as simple as

A special kind of class that we will use a lot is Case Class. Case Class can be declared as

and see below Pattern Matching for use case.

You may know the switch..case in other languages. Scala provides a more flexible and powerful technique, Pattern Matching. Below example shows one can match by-value and by-type in one match.

It's very convenient to use case class in pattern matching

Here we not only matched p as Patient type, but also matched patient name and extracted one member field from the Patient class instance.

Working with large real-world applications, you usually need to compile and package your source code with some tools. Here we show how to compile and run a simple program with sbt. Run the sample code in 'hello-bigdata' folder

The source code file hello.scala is compiled and invoked.

This is a very brief overview of important features from the Scala language. We highly recommend readers to checkout references below to get a better and more complete understanding of Scala programming language.